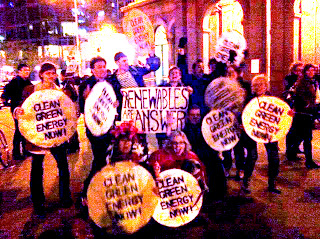 The OtP team was out in force at the New York Mayoral Forum on Sustainability, hosted in The Cooper Union’s Great Hall on Monday night. Nine of the major mayoral candidates were in attendance—Albanese, Carrion, Liu, DeBlasio, Catsimatidis, Lhota, Thompson, McDonald, and Quinn—to answer questions about how they would handle environmental issues as the next Mayor of New York City.
The night started out with what should have been an uncontroversial question. Brian Lehrer (host of the Brian Lehrer Show on WNYC) asked each candidate whether they believed that global warming was a real threat that demanded action. To their credit, only one candidate disagreed with this assessment; Mr. Catsimatidis replied that there was still plenty of research needed to answer this question, which drew loud snorts and sighs from the audience (note to Catsimatidis: that line might work with a different audience, but I would imagine that most of the audience on Monday night was familiar with the overwhelming consensus around this issue). Moving on.
The big surprise of the night for OtP was when Lehrer brought up the SPECTRA pipeline. This is certainly the most prominent forum in which the pipeline has been discussed, and it is certainly the first time the issue has been debated in such a prominent forum. Amazingly, Speaker Quinn called for more public input into this issue. Yes, this is the same Christine Quinn who refused to publicize what few hearings were held on this issue, and who has continually refused to comment publically on this issue despite the pipeline being sited directly in her district (note to Quinn: keep your eyes peeled; there will be plenty of “public input” in the next few months, we promise). Thankfully, John Liu and Bill DeBlasio brought some common sense to the discussion. DeBlasio called for a moratorium on fracking, while Liu called the SPECTRA pipeline “a bad deal for New York City.” We couldn’t agree more.
After the debate, OtP got up with banners and masks, and led the crowd in chants against the SPECTRA pipeline, while other members handed out literature and educated the crowd about the pipeline. When we were asked to leave the hall, we kept the party going out in The Cooper Union’s courtyard, having an impromptu dance party and teach-in on the pipeline.
Monday night was a success for lots of reasons—major candidates publically opposed the SPECTRA pipeline, while many candidates gave compelling arguments and strategies for making the shift toward renewable energy. But for these arguments and strategies to be anything more than speeches, we will have to continue to put pressure on each candidate as the race proceeds. Don’t worry—OtP isn’t going anywhere. We’ll see you in the street!
Posted by Patrick at 6:15 PM No comments: