First US Tar Sands Mine receives approval in Utah

Bad news reached us the other day through the interweb via our friends at Waging Non-Violence.
State Regulators in Utah have approved the first Tar Sands Mine in the United States.
Here is an excerpt from an article from the Salt Lake Tribune:

The nation’s first fuel-producing tar sands mine, planned for the wild Book Cliffs in eastern Utah, has gotten a final go-ahead from state regulators.
The Utah Division of Oil Gas and Mining released its decision Friday to allow Alberta-based U.S. Oil Sands to move forward with the first stage of its mine on 213 acres in the arid high country between Vernal and Moab.
He added that the project will be a "strong example of environmental performance" and praised the "strong leadership" of Utah Gov. Gary Herbert and other decision-makers."This is not unexpected," said Cameron Todd, company CEO. "We’ve been working long and hard on this and dotted all the i’s and crossed all the t’s."
But John Weisheit, director of the environmental advocacy group Living Rivers, called the decision "arbitrary." His Moab-based group, which has fought the project not only before the oil and gas board but also before the Utah Water Quality Board, contends the strip mine is a threat to the air and the water, especially the nearby White, Green and Colorado rivers.
"We have another avenue [to fight the mine] and that’s the appeals court," he said, "and that’s where we’ll go."
Todd said his company has been working on the project since 2005, doing tests and exploration on a 5,900-acre lease site that is thought to hold as much as 190 million barrels of oil. It will use a citrus-based chemical called d-limonene.
But recent approvals, in October by the Water Quality Board and on Friday by the oil and gas board, apply only to a smaller project site. When production gets under way next year, the initial 200-acre project area is expected to generate around 2,000 barrels a day for a total of 10 million barrels.
The main question for both state panels was whether the mine endangers the water — an important question in the nation’s second-driest state.
The oil and gas board earlier gave preliminary approval to the project pending a decision by water quality regulators on whether the project needed groundwater-pollution permit. In its October decision, the water board determined there is no groundwater to pollute.
This, of course, is written from a biased perspective. Our Activist friends in Utah have a completely different perspective. Check out their website here: http://www.beforeitstarts.org/ 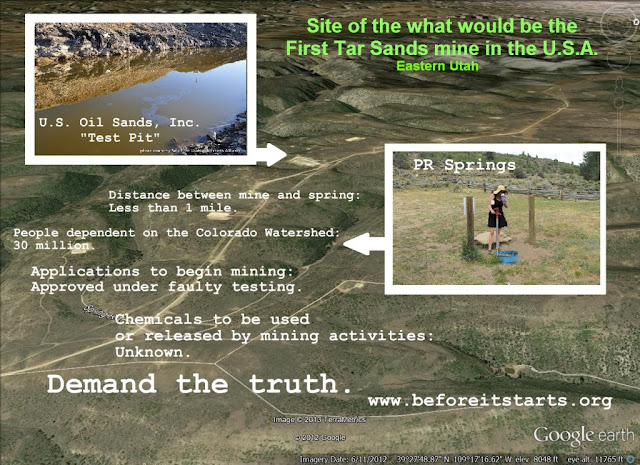