Poland Farmers Stand Up Against Chevron to Fight Fracking 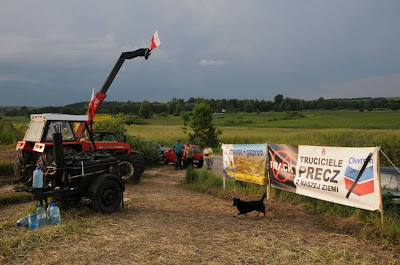 At times one's own local attempts to stop the use of fossil fuels and move to renewables may overwhelm. Taking a look out, we see friends all over the state, nation and world standing up to big fossil fuel corporations.  In Zurawlow, a small rural community in Poland, a group of approximately 150 farmers has been standing their ground for the last week against multinational Chevron. People are sleeping in fields overnight and blocking areas with cars and trucks. Some farmers are reported injured. Of major concern is the potential contamination and loss of water in this farming area, as well as contamination of the farmland.

Chevron fenced off an area for which they hold a lease for drilling. Some media reports say Chevron owns the land. According to the farmers the right to drill was reversed and further regulations considered two years ago, due in part to protests by the citizens of this and three other areas in Poland where Chevron has leases. The Polish Ministry of the Environment had granted Chevron the right to perform seismic studies on leased land as tests before the actual hydrofracturing took place, but there is no right to fence the land.  The link below are from a French news and a French Environmental website.

Farmers fear that Chevron will start fracking operations although that is not allowed without civil hearing and granting of local permission.  They state that all activity must be declared and approved; Chevron has not completed this process per the farmers.  The lease contract is subject to ongoing legislation regarding regulations of public work. Local government appears to be leaning to Chevron's side. The farmers have been entertaining themselves with music and plan to write and record an anti-fracking song. they have also been watching Lech Kowalski's film "Drill Baby Drill." 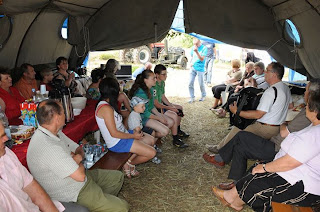 Poland's government has been very fracking friendly to various gas companies, in an attempt to become "energy independent" from Russian imports. Hmm, sound familiar? There are plans to limit fracking protests to groups that are at least a year old, limiting the legal reach of groups in newly endangered areas.

Poland's fracking enterprises are troubled in that wells already fracked have not produced according to expectation of this being a particularly rich deposit area. The government is contemplating increased taxes on profits and the severity of regulation appears that it will be greater than expected. Several gas companies have already given up and left Poland, including ExxonMobil, Marathon and Talisman.

Gas corporations are not happy that Poland plans to have a state owned company involved in the gas drilling mix. How dare the country have anything to do with its own natural "resource."

Sadly, the media is not all over this. The farmers are protesting against Chevron's attempted drilling for everyone in Poland. French media seem to have more interest than Polish. Of course, we are familiar with this problem. Occupy Chevron says No Fracking in Poland. Ban Fracking Now in Poland and Everywhere! Let's stand in solidarity with Poland! 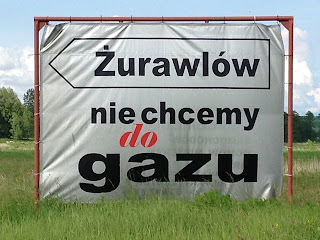