The Renewable Path at the NY Crossroads is the correct path 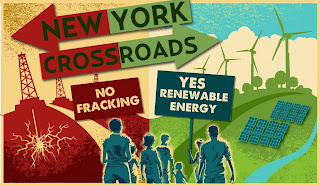 June 17 is extremely important for getting the message out that an immediate path to renewable energy is absolutely necessary, and that high volume horizontal and vertical fracking, pipelines, compressors and LNG stations are inexcusable, false bridges to a renewable future. Many New Yorkers concerned with our energy future are meeting up on the Albany East Capital Lawn, on Monday June 17 from noon to 3 pm, and sending out the message that attention must be paid to this urgent NY Crossroads.

The influence of the gas industry is endemic in the New York government and media. NY Governor Andrew Cuomo suggested to the gas industry that they deliver nice messaging about how safe and good fracking is to New Yorkers.

Empire Energy Forum, in cahoots with the Independent Petroleum Association of America, are blanketing New York's Southern Tier (the front line fighting fracking in the state) with robo-calls and flyers. Here is a sample of what Big Gas is sending out.

A resident of  Madison County has received  flyers from Empire Energy, each different.  One represents a purported toxicologist and mother of 5 from Maryland, NY (Otsego County).  "She claims there is no documented incident of groundwater contamination caused by hydraulic fracturing in NY or anywhere else…  Inside is a diagram of drilling and the “precautions” taken by the gas industry to ensure safety.  (It is entitled “Shielding ensures safety”).  It lists 3 “facts” – (1) NY already has strict oil and gas regs which are being strengthened and that there is community input, (2) the casing and cementing precautions and (3) drilling wastes will be captured in tanks (never being put in ponds and never touching the ground).  Reuse and recycling of wastewaters and solid wastes.  On the back 50,000 new, good paying jobs, $6M to over $2B in new revenue, reduction in utility bills, vital local support for schools, police and fire protection and public services through oil and gas production revenues.  Then it lists NYS Dept of Environmental Conservation, SGEIS and then Empire’s web page."

A quick fact check makes it easy to learn of the blatant lies in this mailer. The regulations, which have not been approved, are not strict and use arbitrary setback distances and amounts of dangerous substances allowed. Citizen input is gathered with reluctance and obstruction to ability to report concerns. There are no good safety measures regarding casings; for that fact there are no good safety measures, period. Dumping of vertical fracking waste is done openly by gas companies. Fracking contaminates the water used and there would be little safe reuse of this water.

Occupy the Pipeline is calling for a BAN on HVHF as opposed to accepting a moratorium. A statewide moratorium would leave the matter open. In the US the fossil fuel industry appears to have a free hand in building the infrastructure of their drilling and pipelines and compression and LNG apparatus, even without final approval. An outright ban would prevent this. A moratorium would allow extension of a number of land leases which would soon expire. Some environmental groups are advocating collaboration with the gas industry to have "strong" regulations that would only allow "safe" fracking.

Please be clear. There is no such thing as safe fracking. There are no safe pipelines or compressors. There will be no safe LNG terminals.

Contamination of ground and other water.

Millions of gallon of fresh water used and poisoned by each drilling of a well.

Devastation of land and land value, along with the possibility of a gas company deserting a well and leaving
the land owner and holder of the land lease liable for liens on the gas company.

Destruction of public recreation areas by allowance of HVHF on this land set aside for the use of citizens.3


The The New York State Assembly passed a two year HVHF moratorium in early March this year. Thanks to fossil fuel lover Senator Tom Libous and his ilk, the NY Senate has stalled the bill in its chamber. The gas industry insists that local town/village fracking bans and moratoriums are illegal because a few of them have been successfully overturned. Remember that these are local initiatives and can't be judged as a group.The gas industry is backing pro-fracking members of the New York State government to push for an easy in for HVHF.

All this while Mark Jacobson and Mark Delucchi of Stanford University have given us a plan for all of New York State to run on renewable energy by 2030. And this sustainable plan would be at a lower cost for the entire state than the $20 billion dollar climate change disaster relief plan (while still retaining addiction to fossil fuels and making worse the climate change disasters the plan is relieving) NYC Mayor Bloomberg just released. Indeed in 2010 Stanford drew up a plan for the entire world to go renewable in 30 years. The cost of renewable energy has decreased over the last decade. 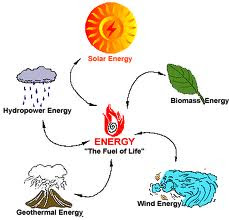