Gansevoort Penninsula, New York City, September 16, 2012. I arrived early, before everyone else, because I wanted to witness the assembly of Occupy Pipeline’s dragon puppet.  I knew I was in the right place when I saw these three dogs occupying the front seat of a work truck. 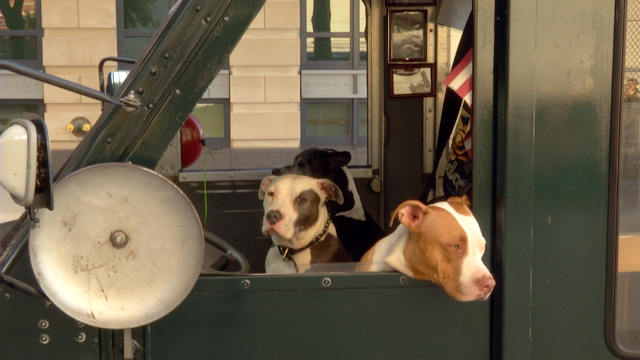 Then the sun rose. To be more specific, puppet master Marina delivered the light and love of her essence, not to mention the puppet, to Gansevoort Peninsula.  Some assembly was required. Rough and ready occupiers sprang into action. Yes, the dragon is now flat as a sheet, but soon the occupiers will inflate it with their spirit. 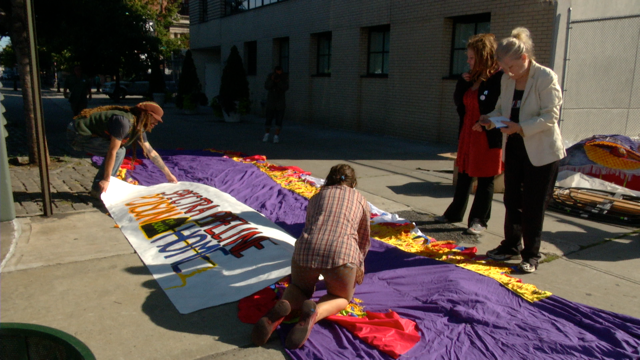 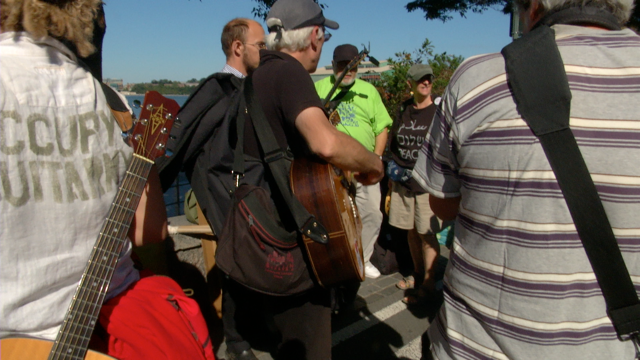 There was no place to stand other than a narrow access path and a busy bike lane.  Why?  Because in violation of two state laws and the public trust doctrine, a corporation called the Hudson River Park Trust has closed a key walkway to accommodate the pipeline extension.

Oh wait, good — Officers of the peace arrived to enforce the law.  But whose law, which law?

Turns out, these police were not at all concerned that thousands  of square feet of walkway had been illegally appropriated by corporations, forcing peaceful citizens into a dangerous bike lane full of Type-A technoübercyclists.  Instead, they threatened the assembling marchers with immediate arrest if they stayed in the bike path.  What law did they cite?  The fluid and all purpose “disturbing the peace”.

The occupiers knew exactly what to do — march to Union Square (which we were about to do anyway) — to join more occupiers for a day of music, celebration, and demands for social justice.

Along the way, the troubadours used sorcery to cause people to dance and clap. 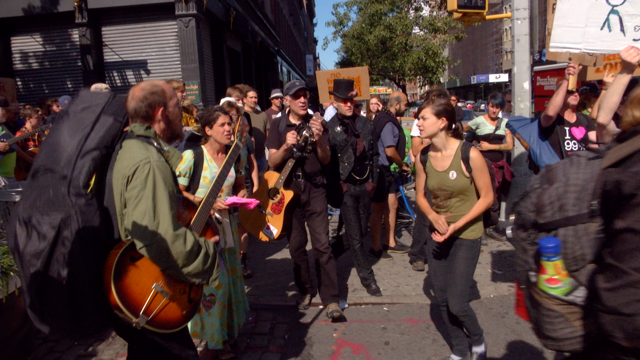 As we approached union square, we met our friends, Code Pink, who were menacing Bank of America with the prospect of pink bras being hurled in BofAs general direction.  Look at these menacing Code Pink ladies…

My dear reader will no doubt understand the necessity of law enforcement’s reaction.  Not at all concerned with the vast crimes perpetrated by corporations such as BofA, and quite rightly threatened by the notions of justice advocated by Code Pink, the officers swiftly implemented a campaign of Shock and Awe against any woman who raised a bra to insult BofA. 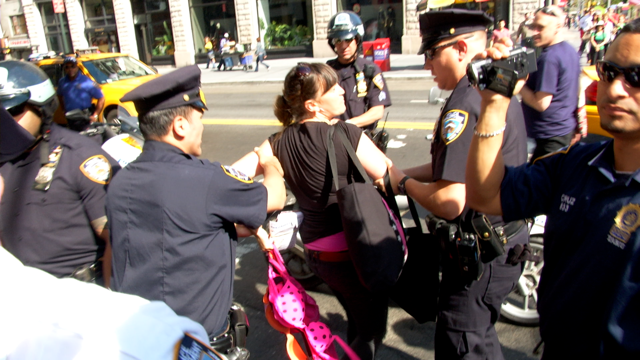 Nevertheless, a defiant female sent one more bra on a ballistic trajectory, yet miraculously escaped arrest. 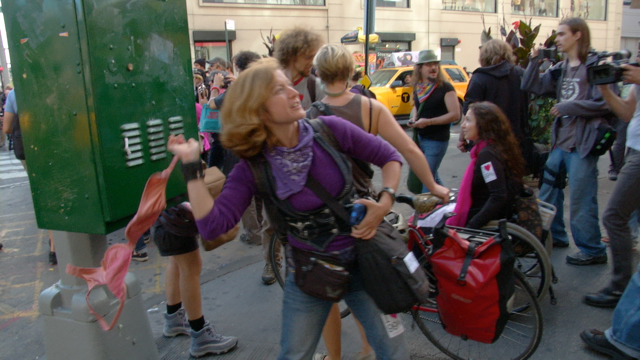 The Little One was not amused. Or maybe a little amused, at being photographed. 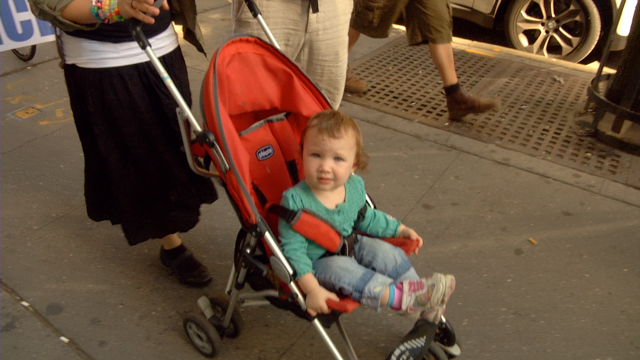 Yet this viscous demonstration by pinky lingerie tossers did not stay the faithful pipeline occupiers from their swift march to way-station Union Square. 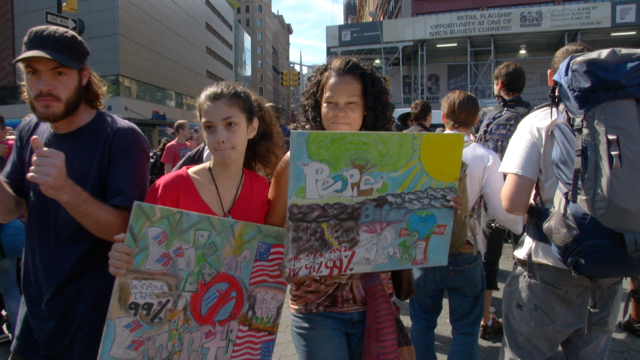 We all took a break, sang some songs, and collected more followers.  Somehow a pink bra wearer infiltrated our cozy club.

Then, led by the magic dragon puppet, we marched down Broadway towards our afternoon objective — Foley Square! 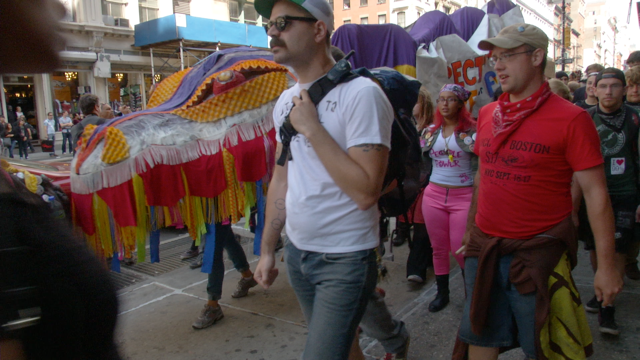 Additional magic was delivered by The Rude Mechanical Orchestra.  When they played, even the police moved to the music, smiled and said they are good.  Notwithstanding the conflict just a few minutes ago, tensions melted away. 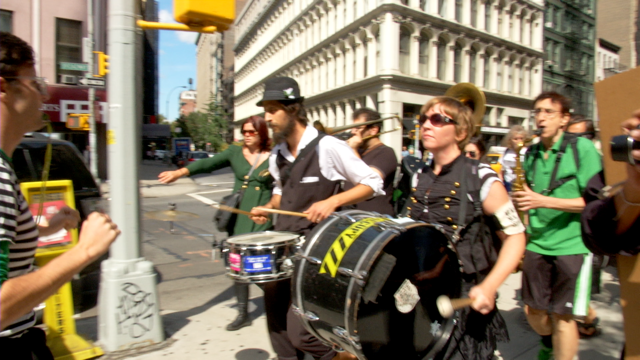 The procession walked many blocks to Foley Square, but everyone had a wonderful time marching, dancing, chanting and handing out leaflets.  When we arrived at Foley, we found hundreds more creative, wonderful activists.  Quickly, Monica organized a rehearsal for the premier of our song, “Frack You” 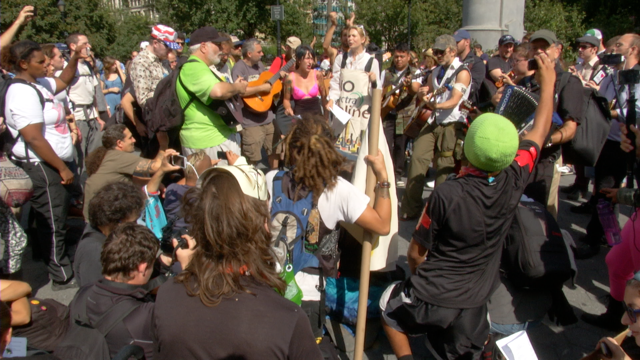 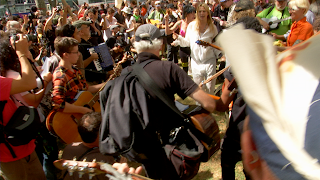 Upon perfected their arrangement, the Occupiers of the Pipeline stormed the stage to put on a defiant performance.  Pink Bra Lady belted out a lead that shook City Hall. Good thing she was not pinched at Bank of America. 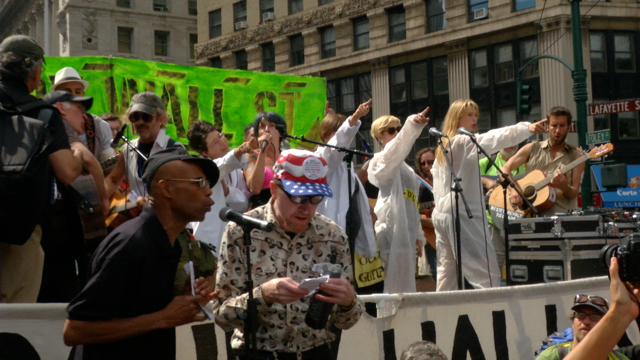 Afterwords, interviews by the adoring Media.  Who is this lady?  She must be a One Percenter because she has a million dollar smile. 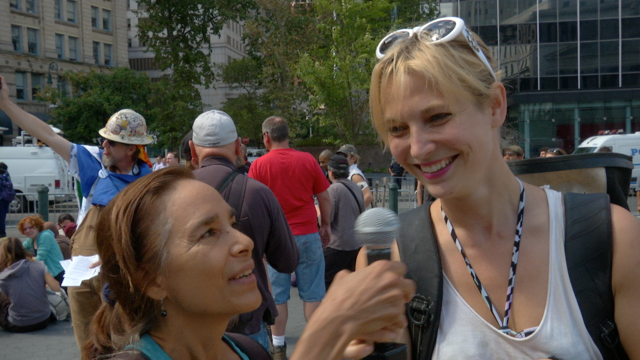 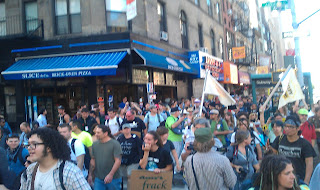 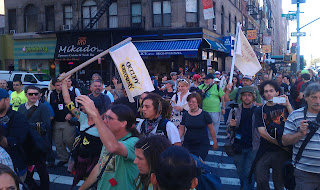 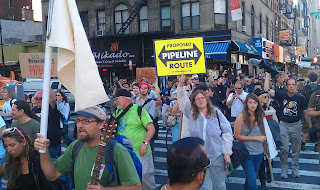 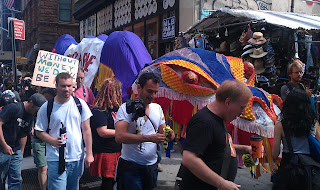 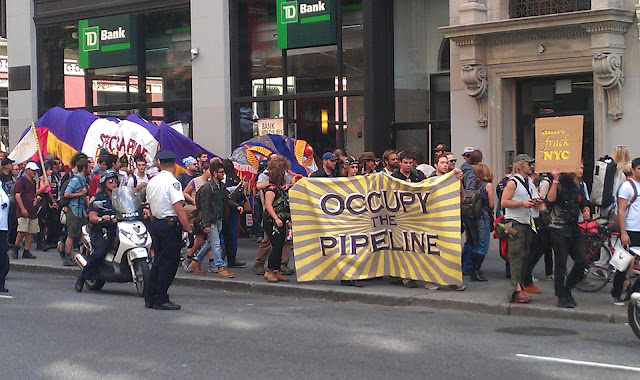 I am @Tsentropa, and I approve of this message.