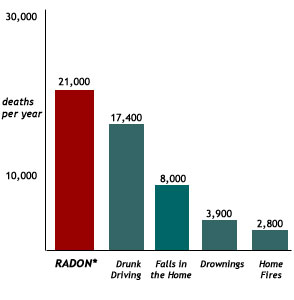 This doesn't include the 30,000 new cases of lung cancer due to radon poisoning expected if Spectra Energy brings Fracked Gas from the Marcellus Shale Formation in Pennsylvania into NYC.
According to a study conducted by Radioactive Waste Management:
Radon in Natural from Marcellus Shale  by Marvin Resnikoff, Ph.D.