Occupy the Pipeline Shuts Down Spectra Construction in NYC


Occupy the Pipeline Shuts Down Spectra Construction in NYC

© Minister Erik McGregor
As part of a nationwide day of action against fossil fuel pipelines fromPennsylvania to Texas, several hundred New Yorkers succeeded Monday in halting construction of a radioactive pipeline threatening the West Village--after unrelenting daily vigils at the Spectra pipeline site over the past several weeks.
Concerns over fracking have received high profile attention in recent months, attracting stars such as Scarlett Johansson and Sean Lennon, who will be presenting the film Gasland at the International Film Center in Manhattan this Thursday the 18th.
Since the Texas gas company, Spectra, received federal approval to crack into the New York City waterfront this summer, construction has persisted day and night, rain or shine. Yet a simple call for civil disobedience by Occupy the Pipeline was enough to halt construction: at 2:00 p.m. on Monday, the company locked its gates and sent workers home for the rest of the day.
Wednesday, September 12th, had marked the first economic losses for Spectra as a result of civil disobedience at the site. 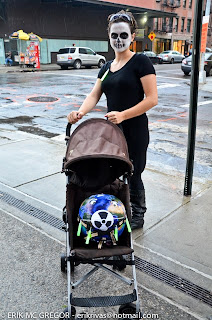 Despite a rush-hour downpour, a hundred West Village residents and their supporters gathered under the cover of the High Line Park–directly beneath which the Spectra Pipeline will run. They painted themselves like skeletons and shook glow sticks to highlight the risk of radon leaks accompanying exposure to fracked gas (in recognition of the Surgeon General's declaration of “Radon Week”). The scene was less sombre than humorous, as all boogied across the West Side Highway to the tune of a New Orleans jazz-funeral sax. Finally, they bound themselves together with "Caution" tape in order to illustrate our common fight against the dirty fossil fuel pipelines tearing across the planet--from the Middle East to Eastern Europe, and from the Midwest to the West Village. 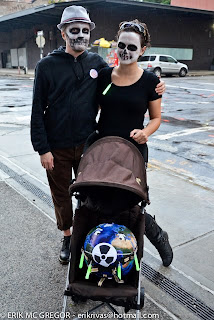 Yesterday's disruption by Occupy the Pipeline follows a series of actions directly targeting Chase, Citibank and Wells Fargo, the big banks responsible for financing the fracked gas pipeline. As investment banks scramble to present oil shale and fracked gas extraction as “the next big thing” in clean and profitable energy, even the Securities and Exchange Commission, along with independent analysts such as Deborah Rogers and Jeannette Barth, have been calling attention to the shaky assumptions underlying their marketing campaigns.
The protest comes days after pipeline construction caused a sewage leak along the West Side Highway. The same interests which stand to benefit financially from expropriating our Commons and snaking pipelines under our feet, are the ones that assure the public that the pipeline will be safe. 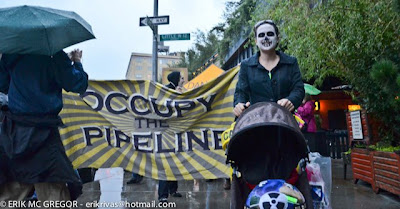 Monday's victory builds on momentum rising across North America in recent days. Less than a week ago,Puerto Rican activists prevailed in securing the cancellation of a permit for a proposed pipeline in Via Verde. And in Canada, after the Yukon Environmental and Socio-economic Assessment Board requested more information from an Alberta fracking company about hydraulic fracture stimulation -- after hundreds of concerned Yukoners complained – the company withdrew its request to drill. Not a week and a half ago, Darryl Hannah attracted media attention to the Keystone XL tar sands pipeline when she engaged in civil disobedience in defense of a feisty 78 year old great grandmother in East Texas who was arrested for “trespassing” on her own land.

This guest post was written by Rebecca Manski, with research by Dave Publow of Occupy the Pipeline.
Posted by Lmnopie at 4:10 PM